For festive cheer, forget Avatar and watch Santa vs Martians

Christmas may be a time for giving and peace to all men, but for me it’s also a time to kick back with a bundle of DVDs and the TV remote as I overdose on films for a fortnight.

As there’s only a few hours until the big day it’s a bit pointless recommending any boxsets, but I thought I’d highlight a few films coming up on TV that I think are worth checking out, with an internet oddity thrown in for good measure.

Firstly, I’ll mention that Avatar is screening tonight on Sky Movies Premiere only so you know to avoid it. Yes, it looks pretty but that’s about it.

Instead, on Christmas Day look out for The Muppet Christmas Carol (C4, 8.50am) followed by The Man Who Would Be King (BBC2, 12.55pm). If you’re Muppets obsessed then turning to Fiver at 5.10pm will bring you 2008’s A Muppets Christmas: Letters to Santa, but that clashes with Doctor Who on BBC1, so on your own head be it.

On Boxing Day there’s Who Framed Roger Rabbit (BBC1, 9.45am), which I’ve been wanting to watch again for ages; Disney’s live action fairytale, Enchanted (BBC1, 3.25pm), which I’ve yet to see but hear great things about; and film noir Farewell My Lovely (BBC4, 10.40pm) which deserves to be seen at any time of the year.

Also look out for John Wayne film, True Grit on Thursday 30 (C4, 1.40pm), a chance to watch the original before the Coen Brothers’ remake arrives in January.

Finally, for one of the oddest films of the season, get yourself over to YouTube to watch 1964’s Santa Claus Conquers the Martians.

It’s the middle of Septober(?) on Mars and the Martian children have been watching Earth broadcasts discussing Christmas. Deciding that their offspring deserve presents, the Martians decide to kidnap Santa and take him back with them, only for Santa to fight back against the pesky aliens.

It’s as bad as it sounds yet oddly compelling at the same time. It’s also been voted one of the worst films ever made, which makes it a must watch in my book.

Those are just a handful of films to try this holiday but I’m always looking out for more, so let me know over on Twitter or leave your film choices below.

Taking us back to a time when Charlie Chaplin wasn’t a global sensation and his film appearances were still being honed, Chaplin at Keystone, the BFI’s latest release is no mere repackaging of previously available material.

While copies of the films made at the Keystone company have been available before, those were very much the bottom of the barrel when it came to picture quality and actual content. Thanks to reels of film being screened hundreds of times and the work of judicious editors through the years, many of whom decided to recut Chaplin’s output to their own tastes, the full versions of his work have rarely been seen since their debut in 1914.

Now, thanks to a global restoration project, which saw different versions of the same films spliced together to ensure the best quality, and the most complete, negatives were used, we now have 34 films across four discs which show a young Charlie plying his trade on screen for the first time.

From the initial appearance of The Tramp, Chaplin’s mustachioed alter ego who become infamous in later years, at a car rally in Kid Auto Races at Venice, where the crowds have no idea that he’s an actor getting in the way of the camera and think he’s just a troublemaker, it’s clear that something special is being born in front of our eyes.

Unlike later Chaplin productions, where he would take on writing and directing duties as well as the lead role, he has less input in the first few scripts, and it shows. Keystone shorts, usually around 12 minutes in length, weren’t the most sophisticated, and it can get tiring to see yet another rock being hurled at someones head or fruitless chase sequence. It took stars such as Chaplin to change audiences’ perceptions of the genre.

From Laughing Gas on disc two of this set we’re into the Chaplin directed films, titles such as Dough and Dynamite, The Rounders and His Musical Career brought back to something like their former glory.

Harmless bouts of violence may be in evidence for most of these films, but we’re also able to see the look on the tramp’s face when he falls for a new girl or tries to get comeuppance against one of his rivals. Chaplin’s star quality was obvious here, as was the common touch which endeared him to a global audience.

With the final disc including the feature-length Tillie’s Punctured Romance and featurettes on the restoration project, the end product does, rather amazingly, offer viewers of these films something new after almost 100 years.

Ask most film fans what their favourite animated movie is and you’ll receive a variety of answers, from Disney’s Lion King or Jungle Book to Pixar’s Up or Toy Story.

All good responses and perfectly reasonable when you consider that most opinions are dictated by what’s on at the multiplex or readily available on DVD.

Thankfully, writer and animation fan Andrew Osmand has steered away from the multiplex for the majority of his new book, 100 Animated Feature Films (BFI/Palgrave Macmillan, £20). He takes as his starting point the first animated feature in 1926 (The Adventures of Prince Achmed) and doesn’t pause for breath until reaching 2010’s The Illusionist. 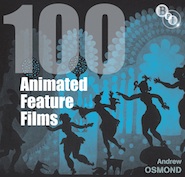 Moving from Russia to Hong Kong, with the occasional stop-off in Japan and Edinburgh, Osmand introduces us to films as diverse as 1958’s The Fabulous World of Jules Verne, which incorporated a mixture of live action, stop-motion and other techniques to tell its ambitious story, and the Canadian post-apocalyptic oddity, Rock & Rule.

With an introduction and brief overview for each, there’s also space for some analysis of the titles, with background to the creation and reception of the pictures. There’s a welcome reappraisal of Raymond Briggs’ When the Wind Blows, its lead characters dismissed by one critic as “stupid”, something we’re asked to rethink.

Blockbusters certainly aren’t ignored here, but neither is Osmand overly reverential to them, a recognition that not everything which emerged from the House of Mouse deserves Oscars or immortality. Thankfully he doesn’t let Jungle Book get completely trashed, even if  critics have been happy to do so since its release.

There’s also a welcome championing of animator Richard Williams’ The Thief and the Cobbler, a gloriously mismanaged production which took over three decades to make but which still isn’t completed, at least not in the way Williams would like. It’s an epic story worthy of any fairytale, but sadly this one doesn’t have the happy ending that Walt Disney would almost certainly have insisted upon.

At 246 pages this is a weighty-yet-compact hardback, which also includes a useful bibliography to aid further reading. Readers will inevitably come away from the book with a new appreciation for the world of animation, no doubt keen to track down many of the films mentioned, so be warned that a quick pre-Christmas skim is recommended to aid a dash to the local DVD shop.

Another look at Peeping Tom

For cinema-goers who enjoy something a bit darker from their films, 1960 was something of a vintage year. While in America Psycho was unleashed upon the world, over here we were given psychological thriller Peeping Tom: one became an instant hit and the other was deemed a failure.Best known for his collaboration with producer Emeric Pressburger and films such as The Red Shoes, director Michael Powell’s decision to make Peeping Tom, the story of a young man who gets a sexual thrill from killing young woman, should have been a straightforward, and non-controversial, one.

Carl Böhm stars as Mark Lewis, a young man who was psychologically abused by his filmmaker father (played by Powell) as a child. Now a cameraman himself, Mark is drawn to capturing beautiful women on film, or rather capturing their fear on film, before murdering them.

Co-starring Moira Shearer, Shirley Anne Field and Anna Massey, Peeping Tom is an accomplished thriller, Mark treated with some sympathy by Powell and screenwriter Leo Marks, while actual blood and gore is left to the imagination.

Peeping Tom arrived in UK cinemas in early 1960, the first reviews appearing soon after. Instead of celebrating the release of a new film from an acclaimed director, the UK press turned on Powell. Reviews were almost universally scathing, words like “vicious”, “hideous” and “nasty” directed at the film’s makers instead of the characters’ actions within it.

The harshest review came from The Tribune on 29 April 1960, critic Derek Hill stating that: “The only really satisfactory way to dispose of Peeping Tom would be to shovel it up and flush it swiftly down the nearest sewer. Even then the stench would remain.”

Now, as the film gets an anniversary cinema release (at the Cameo from tonight and coming soon to the Filmhouse) and a classy Blu-ray special edition from Optimum, which looks at the scandal and the film’s subsequent reappraisal by Martin Scorsese and modern audiences, we can see what the fuss was about.

I found it a very dark and adult film which, unlike many “slasher” flicks, shows us how Mark came to be the way he is. We don’t forgive him for his crimes, but we do understand them. It’s not vicious, hideous or nasty but it is emotionally brutal, especially in Mark’s scenes with Helen (Massey).

It may not be better than Psycho but it’s certainly its equal.

Here’s a look at the trailer: