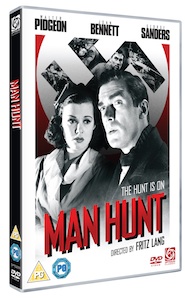 Opening with Thorndike placing Adolf Hitler in the sights of his rifle, before being captured by the Nazis who suspect him of planning to assassinate their Fuhrer, we’re soon involved in Thorndike’s plan to escape their clutches and make his way back to Blighty.

With assistance from cabin boy, Vaner (a very young Roddy McDowell), and cockney sparra’ Jerry Stokes (Joan Bennett), Thorndike takes on the might of German Intelligence in a foggy London where WWII is about to begin.

The direction is typical Lang, holding the viewers attention even when the film feels slightly overlong thanks to Thorndike’s twisting and turning escape plan.

It may not be classic Fritz Lang, or indeed the most thrilling of thrillers, but Man Hunt is an important release for Lang completists and there’s fun to be had in watching the encounters between Pidgeon and Sanders, which culminate in a bizarre end for one of the characters.

Just two years after his appearance in 1966’s Gambit, a fun heist movie which saw Michael Caine team up with Shirley Maclaine to pull off a robbery, the actor returned to cinema screens as a very different type of con artist in Bryan Forbes’ Deadfall (Optimum).

What should be a simple enough job turns into a complex series of double crosses and lies, Harry and Fe falling for each other as sexual politics inform Moreau’s actions.

Deadfall is an oddity, the script playing with viewers’ expectations of Caine’s usually chirpy persona and weaving in subplots which aren’t usually found in caper films, specifically Moreau’s sexual proclivities.

Forbes succeeds in providing tension during the heist sequences, it’s just the emotional aspects which don’t quite hit the mark.

Sexual politics are also on the menu in a very different place and time in Martin Ritt’s adaptation of two William Faulkner stories, The Long Hot Summer (Optimum), as Paul Newman’s Ben Quick arrives in a small Deep South town and lights the fuse on local passions (among other things). 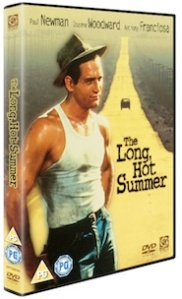 Keeping his head down after causing trouble in another town, Quick arrives in Frenchman’s Bend where he meets local landowner, Will Varner (Orson Welles), who takes him under his wing.

With a stellar cast, sumptuous set design sumptuous and Newman prowling around in his first film role, this is a joy from start to finish, though the exaggerated Welles does threaten to tip the film into farce more than once.

Avoiding many of the trappings of its more serious 1960s stablemates, by depicting the deepening mental instability of its eponymous character in broad strokes and larger-than-life imagery, Morgan – A Suitable Case for Treatment (Optimum Releasing) is something of a unique picture.

David Warner is Morgan, a man whose marriage to the aloof Leonie (Vanessa Redgrave) has fallen apart, causing her to take up with a new man, Charles Napier (Robert Stephens), while Morgan slumps into depression.

Determined to win his soon-to-be-ex-wife back, Morgan undertakes a series of “rescue” attempts, his aim to kill Napier or die trying. With explosions, kidnapping and a gorilla suit all part of Morgan’s increasingly unusual armoury, Leonie has to decide whether she’s better off with a mad man or a life with some stability.

Morgan’s actions may be outlandish, his mind losing its grip on reality, but Warner still manages to elicit sympathy from the audience, even in the fantasy sequences.

Redgrave makes for sultry and sexy opposition for our hero, her intentions never entirely clear, though Morgan’s feelings do appear reciprocated. Poor Robert Stephens is out-acted at every turn by Warner, but he manages a few interesting moments as the more serious suitor.

With a strong supporting cast in the shape of Irene Handl, Bernard Bresslaw and Graham Crowden, Morgan is a fun romp with a serious edge, the very definition of a bittersweet comedy.