DVD Round-up: Midnight Cowboy, Who Can Kill a Child?, Isle of the Dead and The Black Pirate

Released in 1969, during one of the most exciting periods of American filmmaking which saw Bonnie and Clyde and Easy Rider take cinema audiences by surprise with their rawness, Midnight Cowboy (20th Century Fox Home Entertainment), still has the power to shock and impress.

Jon Voight plays wannabe cowboy Joe Buck who gives up his job washing dishes and heads to the bright lights of New York, where he discovers that making it rich will take more than good looks and luck.

English director John Schlesinger’s capturing of America’s seamier side, complete with male prostitution and the appearance of archetypal New York hustler in the shape of Dustin Hoffman’s Ratso Rizzo, is inspired, Waldo Salt’s script touching on some tough themes which helped the film receive an X certificate from the US censors.

This didn’t stop the film winning Best Picture at the Oscars, something it’s hard to argue with. Add to the impressive performances a gorgeous score by John Barry and in Midnight Cowboy you’ve got a film that helped set the standards of the 1970s and beyond.

Three years earlier and on another continent, director Narciso Ibáñez Serrador had created another classic, this time of the horrific kind, in Who Can Kill a Child? (Eureka). Set in the Spain of 1976, the film sees a young couple travel to an idyllic island which appears to be inhabited mainly by children. 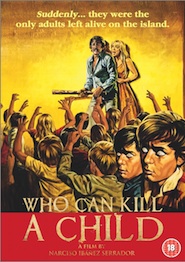 As they explore the island they discover that the adults have in fact been killed by the children, though quite why isn’t immediately obvious. As the pair attempt to find a way off the island, using their wits ahead of any violent acts, the rules of civility become blurred and the viewer begins to realise that there can only be one way this tale can end.

With its beautifully shot exteriors and eery interiors, Who Can Kill a Child? impresses at first glance. Add to this a well cast pair of leads in Lewis Flander and Prunella Ransome and a suitably innocent looking horde of kids who then turn nasty, and this becomes a fascinating character study that isn’t as bloodthirsty as its title might suggest.

One of the most overlooked of 1970s horror films, Who Can Kill a Child? deserves reappraisal with this new release, an interview with the director helping to put its production into context.

By coincidence, this week’s other horror release also takes place on an island, in RKO Pictures’ Isle of the Dead (Odeon Entertainment) from 1945.

Boris Karloff plays the Greek soldier, General Pherides, who takes a break from fighting the Balkan War in 1912 to head to a small remote island where his dead wife in buried. On the island he finds a small group of strangers keeping each other company and the arrival of a final unwanted guest: the plague.

As members of the group begin to die, Pherides becomes positive that the reason isn’t medical but supernatural and that one of them is a kind of evil spirit, the Vorvolaka. Convinced that he’s right, the soldier tries to ensure she can’t continue her killing spree, but the only we she can truly be stopped is if she herself is killed.

Produced by the legendary Val Lewton, best known for Cat People and The Body Snatcher, Isle of the Dead is a slow burner but a rewarding one at that. Karloff does bonkers to perfection, his portrayal of Pherides a convincing one which ensures the quieter moments are never dull.

Director Mark Robson also makes the most of the studio interiors, some extremely creepy sequences of characters roaming through the fog while chased by something unknown lingering long in the mind.

Whether or not the horror at the film’s core can be cured by science or not doesn’t really matter, what makes this film a success is the interaction between the characters and the feeling that the mind can create far more terrifying, and dangerous, things than demons can.

Finally, forget Captain Jack Sparrow and the trappings of 3D for 91 minutes as the glory that is Douglas Fairbanks’ The Black Pirate is released on DVD thanks to Park Circus.

Directed by Albert Parker but devised, produced and starring Fairbanks, this silent gem has everything the discerning pirate fan could want, with evil pirates, a handsome hero, a beautiful princess in distress and a plot that doesn’t pause for breath.

The plot, for what it’s worth, sees the sole survivor of a plundered vessel avenge the death of his father by taking up with pirates, sailing the high seas and fighting anyone who gets in his way. All of which is an excuse to let Fairbanks buckle his swash both in and out of the water as audiences marvel at the Technicolor technique used to make the film appear even more epic.

It’s hard to find fault with The Black Pirate, its sheer scale still impressive over 80 years later and Fairbanks the template that heroes have tried to emulate ever since.

To say that you need to own this title to really know what an adventure movie should look like may sound like hyperbole, but if you want to see how it should be done, whether in 3D or not, you need to have The Black Pirate in your DVD collection.

Alongside the film itself is an alternative black and white version with Fairbanks narration (you won’t get past the first five minutes) and an audio commentary from Rudy Behlmer, plus an alternative score.