I’ve long been a fan of the output of Renown Films, a UK DVD label releasing some long-forgotten and under-appreciated British films.

Forget the likes of Brad Pitt and Ryan Gosling; actors such as William Hartnell and Jack Warner are Renown’s leading men in titles such as 1950’s Double Confession or 1962’s Jigsaw. 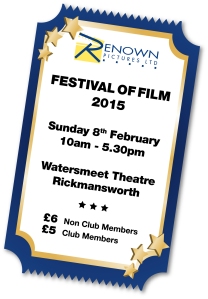 The company recently announced that they’re branching out from the DVD business into the world of the film festival, with the announcement of the The First Renown Pictures Festival Of Film 2015, which takes place on Sunday 8th February in Rickmansworth’s Watersmeet Theatre.

The day will be introduced by actor Brian Murphy (George & Mildred) and devoted to screenings of previously thought-lost British B-movies including 1951’s London Entertains, 1956’s Tons of Trouble (featuring William Hartnell) and 1969’s Hole Lot of Trouble (none of which appear to be available on DVD) alongside guest appearances from the likes of Jess Conrad and experts from the world of film.

There’s also due to be a talk from a friend of mine, writer and broadcaster Robert Ross, who’ll be discussing his forthcoming book, Forgotten Heroes of Comedy.

It should be a great day and I’m planning on heading along to enjoy a cup of tea and a slice of cake while soaking up the atmosphere with some fellow classic film fans – tickets are on sale now from just £5.