Bristol’s Slapstick Festival is one of the highlights of my cinematic year and it’s back from 26 – 29 January 2012.

Stuffed with screenings of silent films introduced by experts and celebrities (including many experts that are celebrities) and illustrated talks on all aspects of comedy, Slapstick manages to walk the fine line between populist and scholarly without faltering.

Those are just a fraction of the events on offer (did I mention Terry Jones introducing Life of Brian or Griff Rhys Jones introducing Keaton’s The General with a brand new score?) and I’d urge you to head over to the Slapstick 2012 website to take a look at what you can enjoy in January.

That’s after you watch the brand new trailer for the event and my own short slide show from Slapstick 2011 including contributions from The Goodies and a few other well-known names:

Visit the Slapstick 2012 website and book your place now. 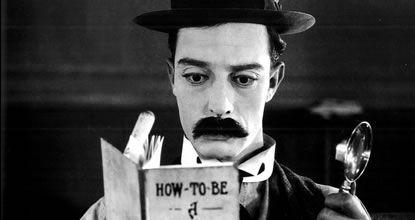 To celebrate TCM’s month-long screening of Buster Keaton films every Sunday in October, I’ll be following along from the UK through the week with the aid of various DVDs, Twitter and this blog.

This second Holyrood or Bust(er) post will cover many of the films being screened on TCM on Sunday 9 October 2011, all grouped under the banner of An Artist at Work: Sherlock, Jr, Good Night Nurse, Steamboat Bill, Jr, The Cameraman, Coney Island, Back Stage, Limelight, The Bell Boy, She Went to the Races, The Haunted House and Hard Luck.

Week two of this Buster-a-thon has started slightly later than planned but Sherlock, Jr isn’t a bad place to do so.

A recurring idea in Buster’s films is the dream sequence, something which allowed him to come up with even more outlandish ideas than his films set in “reality” would allow.

Here, Buster is a cinema projectionist who wants to be a great detective, but who is destined to pine after Kathryn McGuire while Ward Crane’s nasty piece of work con man tries to get her first. The opening minutes, as Buster goes about his duties at the cinema, may be more leisurely compared to what comes later, but anyone who manages to get that much humour out of sweeping some trash clearly knows what he’s doing.

The major dream sequence of the film, which sees Buster enter the cinema screen to interact with the locations being screened, is one of the most impressive moments in any of his films, and with Buster Keaton that’s saying something.

As ever, he’s not content to go for the simple gag, instead lining up each scene change seamlessly so that the joke is flawless. We’re an audience who are watching an audience watch Buster and it’s hard to imagine quite how audiences in 1924 would have reacted to something so unique.

But that’s Buster all over, always trying something new and experimenting with the medium he’s working in, while other performers were happy to work within the constraints.

The pair were good friends and it shows here, Buster seemingly having a good time – he even smiles a few times! – and going with the flow as Fatty indulges in the bizarre routines that made him so popular. Fatty’s tendency towards cross-dressing mixed with a man-child type persona make him an acquired taste today, though Good Night Nurse is by no means a bad film. It just isn’t a proper Keaton film, which is the real problem.

We’re back on track for 1928’s Steamboat Bill, Jr, a wonderful slice of Buster which casts him as the estranged son of an old sailor who comes to work with his dad, only for the latter to worry that his boy is too soft to do anything much.

I love watching this film, particularly the sequence in the jailhouse, when Buster arrives with a loaf of bread that has clearly fallen into the tool chest…ahem. The entire 10 minutes is a joy and it could have been a film in itself, Buster’s expressions and hand movements as he tries to convince his father to take the bread. Bliss.

The infamous stunt involving a house falling on Buster can be found here (he’d done it before, but never on this scale), and it still shocks 80 years on. Considered to be one of Buster’s last great films, it’s a joy from start to finish (a phrase I may have used before in these blog posts, but there are only so many ways to describe the man’s work).

END_OF_DOCUMENT_TOKEN_TO_BE_REPLACED 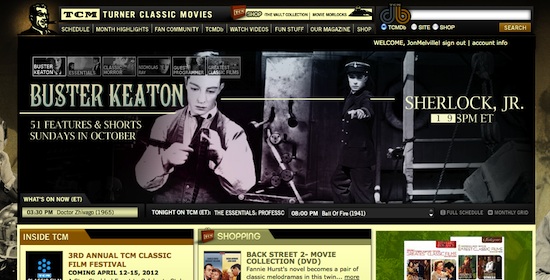 There’s good and bad news for Buster Keaton fans this month. The good news is that a major TV station, TCM, has named him their Star of the Month, screening Buster’s films every Sunday in October. The bad news is that TCM is for US residents only.

Born on 4 October 1895 as Joseph Frank Keaton, the young son of vaudeville performer Joe Keaton was nicknamed “Buster” after being thrown around the stage once too often. Clever, athletic and determined, Buster worked his way up through the ranks of the entertainment world to make himself one of the greatest silent film stars alongside Charlie Chaplin and Harold Lloyd.

I’m something of a recent convert to Buster, discovering his work properly around 2006 on DVD. I was soon hooked, something about his lack of sentimentality and willingness to innovate meaning that every picture was like an experiment with the medium that we were priviliged to see.

For those of us not in America it’s hard to imagine quite how huge TCM is over there. I was introduced to the channel, and its many fans, in April when I flew to Hollywood for the second annual TCM Classic Film Festival, a chance for classic movie lovers to gather and watch fantastic films in legendary surroundings. 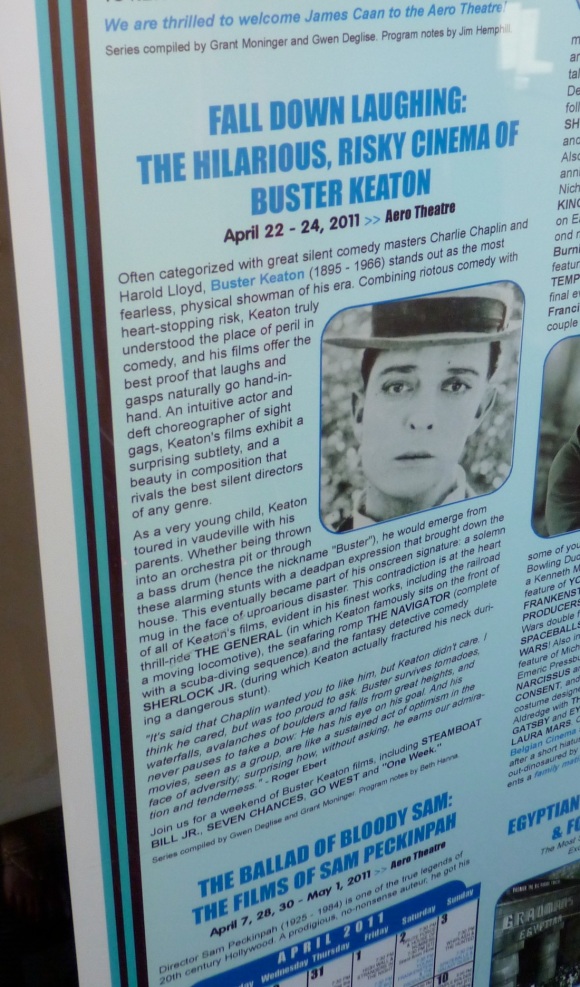 Buster flyer at the Egyptian

Buster was celebrated with a screening of The Cameraman at The Egyptian Theatre, where the film was accompanied by New York band, Vince Giordano and His Nighthawks. I was in the audience for the event and, even though I’ve watched the film many times, I noticed things I hadn’t seen before as the packed auditorium shook with the laughter of the crowd. A truly wonderful evening that was worth the air fare alone.

On leaving The Egyptian I noticed a programme promoting screenings at LA cinemas [see image on right], including a weekend of Buster’s films at the Aero Theatre. Film fans have it easy in that city.

While I can’t sit and enjoy TCM’s Buster screenings, as a huge fan of the actor (I rate him above Chaplin and Lloyd in case you hadn’t guessed) I intend to follow proceedings with the aid of my various DVD sets, the TCM Twitter feed and this blog.

I’ll provide some commentary on my rewatch of the majority of the features and shorts that the US audience will be seeing and I’d recommend anyone with a Buster Keaton set on the shelf dusts it off as well, or order Masters of Cinema’s stunning boxset as soon as you can.

I’ve also got Edward McPherson’s 2004 Buster biography, Tempest in a Flat Hat, to read this month, and some compilation DVDs, Keaton Plus and Industrial Strength Keaton, which I keep meaning to watch.

You’ll also find a lot of Buster love over on film blog The Kitty Packard Pictorial, where Carley Johnson is hosting a month-long celebration.