For anyone outside the USA who may have stumbled upon this post, you’re probably wondering who Bob is and why I’m welcoming him back. That’s a valid question, as even those who do know who Bob is may be questioning why a blogger in the UK is mentioning a TV star from the other side of the Atlantic whose shows aren’t screened in that country.

When I decided to head to Hollywood earlier this year to attend the second TCM Classic Film Festival, a spin-off from the TV station launched in 1994, I had hoped to immerse myself in old movies and find out what it’s like to watch them on the big screen in cinemas such as Grauman’s Chinese Theatre and the Egyptian Theatre, venues I’d only ever glimpsed on TV. 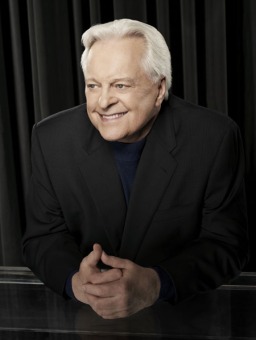 What I discovered were a small army of people who had arrived by car, bus, train and plane to celebrate classic films in the company of strangers, the only thing binding them together being the TCM channel and its public face, Robert Osborne.

Born in Colfax, Washington, Osborne began his career as an actor in the 1950s, before moving on to journalism. Osborne became the host of TCM in 1994.

Osborne’s introductions to every film shown during the week have become almost as important to the channel’s subscribers as the films themselves; for millions of people who love classic cinema in America, Robert Osborne is their guide.

The love shown for Osborne at the TCM Festival was palpable, and to British eyes it was something of a shock. We don’t really have anyone in the UK media who could be compared to Osborne, though it could perhaps be said he’s something of a mix between film critic Barry Norman and interviewer Michael Parkinson, though I’m not sure that does him justice.

It’s also worth noting that we really have nothing to compare to the US TCM in the UK, with our version a pale imitation of the original.

I was able to interview the man on the eve of the Festival’s launch as part of a roundtable discussion and the result was published on the blog of the Edinburgh Evening News.

Osborne was a charming and erudite interviewee and his love for cinema shone through.

In July 2011 it was announced that Osborne would be taking a break from hosting duties to undergo a minor operation, leaving his fans concerned and a little lost.

This Thursday, 1 December, sees Osborne return to US TV screens and the fans are celebrating with various blog posts, photos, videos and tweets. I was asked to write something about his return and this blog post is the result.

I decided to dig out the audio of the interview I carried out at Hollywood’s Roosevelt Hotel and snip out the section where I asked a question about the rise in popularity of classic movies. It runs to just under five minutes and it hopefully gives a flavour of his knowledge and interest in the subject. You can read some of the transcript from the original interview below.

“Have you noticed an increase in popularity in classic films in the last few years?”

“In the last five years I’ve noticed a passion that was never there before and I think that television has something to do with it,” says Osborne.

“We have all these channels now, and when I go home and I always check TCM first to see if there’s something I particularly want to watch and if not I try the others and it’s just terrible. Even family sitcoms like Two and a Half Men are so smutty and basic. Then there are the reality shows.

“I think people gravitate towards TCM because you can find a really nice story, you don’t have to worry about who’s in the room with you, your grandmother, kids or wife and you’re not embarrassed about what’s going to be on the air.”

Osborne pauses before continuing. “The one thing movies don’t do today is necessarily leave you with a positive feeling when you exit the movie theatre. But those sharks who ran the industry back in the 1940s were showmen and wanted you to come back the following week, even if you had The Grapes of Wrath or High Sierra.

“At the end of that Humphrey Bogart is shot and killed and this little dog is licking his hand and Ida Lupino is distraught because Roy is dead. She picks up the dog and she’s walking to the camera and she’s saying “Roy’s free, oh yeah, he doesn’t have to be chased anymore,” and the audience is thinking “Oh yeah, Roy’s free,” and they always knew how to put a positive spin on things.

“Even with the Grapes of Wrath, where there’s a family who have been through just about everything, you go away thinking you can make it if you’ve got family and you stick together. I think the movies we have on the air, the mix of Fred Astaire and Ginger Rogers, Bacall and Bogart, Errol Flynn and Olivia de Havilland, Robert Mitchum and Jane Greer, offers movies that are endearing to people who don’t get that elsewhere.”

Are class and style four letter words to filmmakers today?

“We’re in an era where people love everyone to be common and real,” muses Osborne. “If you’re a taxi driver you don’t want Robert Taylor or Tyrone Power you want Robert De Niro looking just like a cab driver in New York. If you have a beautiful woman like Michelle Pfeiffer you want her to downsize the glamour and not have her look like Grace Kelly.

“I think people still love the reason they used to go to movies, and that’s for something different from their everyday life. There’s nobody like Barbara Stanwyck, Bette Davis or Gary Cooper today. Even when they were playing real people there was something larger than life and heroic about them and we don’t really have that today.

“I’m sure those people are out there but they’re not able to have careers.”

I hope the TCM viewers enjoy having Bob back and that I get another chance to head to Hollywood again in 2012 to mingle with the fans and perhaps Osborne himself.
Tagged Hollywood, Robert Osborne, TCM
1 Comment
Uncategorized

To blog or not to blog, that is the question. In a world stuffed full of film blogs, does it really need another, this time based in Edinburgh, Scotland and focusing on classic movies from through the ages?

I’ve been writing about film in various places for the last few years, discussing the latest Hollywood output in the pages of a local newspaper, the Edinburgh Evening News, or happenings around Scotland as part of ReelScotland, but time and again I find myself returning to the topic of old movies, mostly those made before I was born.

Convinced that to ignore our shared cinematic heritage is a Very Bad Idea, the joy of discovering a film that was made in the 1920s is, for me, exactly the same as heading to the local multiplex and stumbling upon something great made this year.

Following a trip to Los Angeles in early 2011, where I attended the second TCM Classic Film Festival, I’ve realised that I need an outlet to discuss the type of films I’m willing to travel thousands of miles to watch in a darkened room. Speaking to actors such as The Trouble with Harry’s Jerry Mathers, it seemed I wasn’t alone in having a fondness for classic cinema.

TCM also confirmed my suspicions that classic movie fans are some of the nicest and smartest people around, equipped with the sort of knowledge about films made decades before they were born that tends to make me feel (slightly) better educated when I have a chat with them in person or online.

I’ll look back at cinema from all countries and eras, with a heavy focus on Hollywood’s Golden Age, from the 1920s to the 1960s. I’ll try to cover the very best films, actors, writers, producers, foley artists, gaffers and whoever else deserves a mention, along the way.

With the wealth of titles now available on DVD, Blu-ray and online, I’ll never be short of things to discuss, and I’ll also mention screenings of some of these films on the big screen, where they really belong. Add to that reviews of new books and special events plus the occasional interview, and there should be something here for most classic movie fans.

As for the blog’s title, Holyrood is a part of Scotland’s capital city which has little relevance to cinema apart from the fact that it sounds a bit like Hollywood. Simple really.