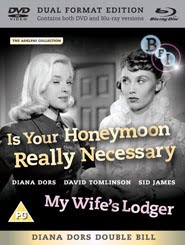 In 1953’s Is Your Honeymoon Really Necessary, Dors plays Candy, the ex-wife of US airman Laurie Vining (Bonar Colleano), whose plans for a little R & R with his new bride are put in jeopardy by Candy when she claims the pair are still husband and wife.

My Wife’s Lodger, from 1952, sees Dors star as Eunice, daughter of soldier Willie Higginbotham who has returned from six years away to find a new man, Roger the Lodger (Leslie Dwyer), with his feet under the table and his family barely aware he’s back.

With Carry On star Sid James on hand (complete with suspect American accent) in Honeymoon, and a plot which seems to be trying to emulate screwball US comedies from the 1940s, this is the better film of the pair. Dors is on form as the sexy Candy, a sparkle in her eye that’s a far cry from the look viewers would come to expect in later years. While My Wife’s Lodger has a constant barrage of one-liners, Dors getting her fair share which she handles with aplomb, they do get wearing after a while.

Coming in a package which combines a DVD and Blu-ray copy of each film, both looking better than ever before, this is top notch treatment for two 1950s comedies which might not be well remembered but which offer fans of Dors and lesser remembered British movies of the period.

Also out now from the BFI is the first ever DVD release of Ken Loach’s director’s cut of his 1979 children’s film, Black Jack.

Filmed in his trademark naturalistic style and set in the 18th century, the film features a young boy, Tolly (Stephen Hirst), who becomes embroiled in the machinations of Black Jack (French actor Jean Franvel), a criminal who is almost hanged but who survives to go on the run with his new friend.

Encountering an upper-class party travelling through the woods, the pair are hired to find an escaped lunatic girl, a search which will see the pair coming to the girls aide while getting mixed up in various schemes as part of a travelling fair.

Deserving of being dubbed a “romp”, Black Jack is both great fun and a beautiful film to look at: Loach has an eye for interesting angles and allows his actors to breathe, the style similar to his 1969 classic Kes, but this time with in period garb and guns.

A commentary from Loach describes the process which went into making the film and he’s not afraid to be critical of his own talents while reminding us that it was made in a hurry and on a tight budget. 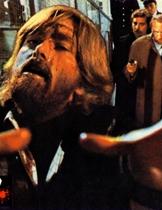 974’s Living Dead at Manchester Morgue (Optimum) stars Ray Lovelock as a North of England based art dealer, George, who finds himself mixed up in supernatural goings on in the countryside when he hitches a lift from Edna (Cristina Galbó).

When a zombie attacks Edna’s car as a result of an electronic pest control machine going wrong and the police become involved, primarily in the form of a stubborn Inspector (Arthur Kennedy), it soon becomes a fight for survival for George and those he comes into contact with.

Lizard in a Woman’s Skin (Optimum) from 1973, was director by cult favourite Lucio Fulci and focuses on the beautiful Carol Hammond (Florinda Bolkan) who is suffering from a series of explicit dreams which often end in the violent death of neighbor, Julia Durer (Anita Stridberg). When Durer is then found dead in reality, the investigations of Inspector Corvin (Stanley Baker) uncover a strange reality which will need all of his expertise to understand.

Dubbed to within an inch of their lives by non-Italian casts and free to go more OTT with the blood and gore, it’s probably safe to say that you’ll know if you’re going to enjoy both films within the first 10 minutes. But, give them a chance, and you could be entranced by the sheer ludicrousness of the scripts and energy of the actors involved.

Of the two, Morgue is the more accessible, the dialogue more entertaining and the concept behind it suggesting a deeper, ecological, meaning to the creation of zombies as opposed to anything supernatural.

Lizard, on the other hand, is more problematical, requiring much greater head scratching from the viewer to work out quite what’s going on, while Stanley Baker’s policeman (and his annoying whistle) are a bizarre addition.

While extras are non-existent, both films have been given a spit and polish worthy of their cult reputations and it’s a pleasure to watch them as they were meant to be seen.