There may be reports of a monster in Loch Ness stretching back as far as the 7th century, but we’re still waiting for the perfect film to tell Nessie’s story. 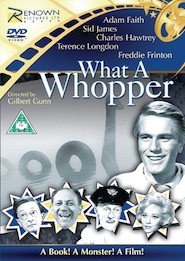 One such attempt is 1961’s What a Whopper (Renown Pictures Ltd), a somewhat knockabout  comedy with an impressive pedigree: it’s written by Terry Nation, the man who invented the Daleks; the music is by The Avengers’ composer, Laurie Johnson; and the theme song is arranged by the one-and-only John Barry.

Adam Faith stars as Tony, a wide-boy author who writes a book on the Loch Ness Monster and then takes his pals to the Highlands to somehow convince the gullible locals to believe in faked photos.

Chased by the drunk father of his female friend and hounded by the Scottish police (Terry Scott with a very odd accent), Tony must try to stay one step ahead if he’s going to become a success.

The rather lacklustre production is enlivened by appearances by some of the best-known faces in British comedy, who variously help and hinder proceedings: Sid James, Terry Scott, Spike Milligan, Wilfred Bramble and Charles Hawtrey are just some of those who become involved in the plot.

Though it can’t lay claim to being the finest Loch Ness film, nothing making much sense at any point of the proceedings, What a Whopper does its job by entertaining the viewer for the duration of its run time before going on to become pretty much forgettable. 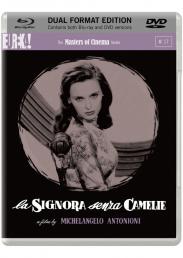 By the mid-1960s the director Michelangelo Antonioni may have been best known for the classic Blowup, but rewind to 1953 and his second film, La signora senza camelie (The Lady Without Camelias) (Masters of Cinema), shows a director already comfortable behind the camera.

The film is set in the world of filmmaking and filmmakers, where a beautiful young starlet, Clara (Lucia Bosé), is introduced to a world of producers, directors and admirers which soons goes awry.

With her new husband against Clara demeaning herself for the camera, the meaning behind her life starts to become unclear and it’s not long before the actress is looking elsewhere for TLC.

Also out now from Masters of Cinema is Antonioni’s Le Amiche (The Girlfriends), a 1955 drama which seems to pre-date Sex and the City by a few decades as a group of women face love, loss and the male sex in Turin. 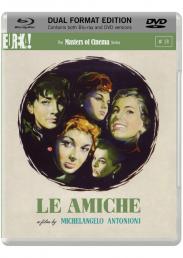 Both films feature women who are able to decide their own fate but who are also at the mercy of the men around them. Society may have been changing in the 1950s, but the swinging sixties were still a while away and there’s a feeling in both films that if the menfolk would leave them alone for a while things would work out much better for everyone.

Of the two films, La signora senza camelie is perhaps the most accessible for the general audience, and certainly for the movie buffs out there wanting to catch a glimpse behind the facade of 1950s Italian filmmaking.

Seeing behind the facade of the women in Le Amiche is just about possible but it’s a more draining experience, though it can’t be denied that Antonioni’s style is as accessible today as it was then.

A must for every 007 fan: the James Bondathon

How you first watch a James Bond film can affect the rest of your life.

For those of us who remember Bond films being shown every Bank Holiday when we were young, usually with chunks excised by an over-eager ITV censor who seemed to think that watching our hero engaging in perfectly reasonable violence against enemies of Her Majesty would corrupt our fragile minds, the results can be mixed.

Either we recall them as curiously dull affairs with far too many adverts getting in the way of the (heavily cut) action, or we remember the sheer excitement of seeing Bond (any Bond) taking on the world and winning.

Now that we’re blessed with Ultimate Edtion DVDs, with more extras than you can shake a golden finger at, we can better appreciate the films. With picture and sound quality at their best, it’s the perfect time to set out on a viewing marathon of all the Bond movies.

Which is exactly what happened in LA the other week.

A group of fans set out to watch 25 Bond films (that includes Never Say Never Again and the both the 1950s and 1960s versions of Casino Royale) in order over three days, rating them as they went along.

The results were surprising and gratifying, particularly if you like On Her Majesty’s Secret Service and Goldfinger. They also made a time-lapse video of the event, with a written report available over on the excellent CommanderBond.net website:

Does Scotland need Local Hero 2 to escape the Nouvelle Dreich?

“Nouvelle Dreich” is a phrase I first heard used this week to describe Scotland’s film industry, and it’s one I think I’m about to adopt.

It comes from an interview I carried out with the actor Bill Paterson to promote a new BBC Two documentary which saw him meet up with director Bill Forsyth, 27 years after they made Comfort and Joy. You can find it on iPlayer for the next few days.

Paterson noted that while the French had the exciting Nouvelle Vague in the 1960s, Scotland seems to revel in the dreich and dour, a diet of drugs and alcohol fuelling our filmic output.

Quite where this all started is hard to pinpoint. Watch Bill Douglas’ autobiographical trilogy from the 70s and you’ll not find many laughs in its depiction of a Newcraighall upbringing, but I wonder if 1995’s Trainspotting is more to blame for our present situation.

There’s no denying it’s a good film, but its subject matter cemented a “heroin chic” view of Edinburgh that we’ve been struggling to shake off for over fifteen years.

More recent films such as Wasted and Running in Traffic contain relentless images of drugs, illegal immigrants and sexual abuse which don’t make them an easy watch.

It can’t be denied that we have social problems in this country, the current recession partly to blame for worsening cases of homelessness, debt and drug abuse. Filmmakers should be putting these issues into the spotlight and I wouldn’t advocate hiding them under a sugar-coated veneer.

I just wonder if we need another Bill Forsyth to take a fresh look at Scotland, one which shows both the positive and negative side of living here. Perhaps Trainspotting: The Musical wouldn’t be right, but humour and pathos are often the best way to engage an audience who see enough dreariness on the news.

Anyone for Local Hero 2?

Richard Attenborough may be thought of these days as cuddly old Dickie, frequenter of chat shows and the sort of grandad everyone wants, but there was a time when he was known for playing slightly unsettling characters in solid British feature films. 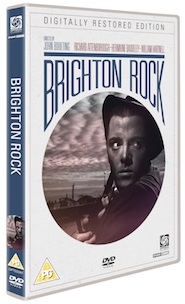 Attenborough’s breakthrough role came in the shape of “Pinkie” Brown in 1947’s Brighton Rock (Optimum), a Brighton-based hoodlum whose career begins to unravel following the murder of a journalist.

When it becomes clear that Pinkie could be arrested if a witness comes forward, he makes it his mission to silence young Rose (Carol Marsh), a girl who has fallen madly in love with him.

Sadly Pinkie’s feelings are more of hate than love and it’s not long before he’s trying to plan a way to dispose of all the evidence, including Rose.

Watching Brighton Rock today, it’s not hard to see why Attenborough’s performance gained him so much praise and the film a place in the BFI’s list of Top 100 British films. The actor is the epitome of evil, a calculating character with no morals and a skewed view of the world.

Aided by the first Doctor Who himself, William Hartnell, as his right hand man, Dallow, and hindered by an innocent Carol Marsh, Attenborough glides through the film with ease.

Brighton is a suitable squalid backdrop for Pinkie’s machinations, the faded seaside glamour a metaphor for the gloss that is slowly rubbed away from his facade as the film progresses.

As chilling today as it was back in the 1940s, Brighton Rock deserves to be watched by a new generation who hopefully won’t forget it now that a new, 1960s set, version has been released to cinemas.