Daniel Craig is back as James Bond in GoldenEye. Well, sort of. It may have been fifteen years today that the 17th official James Bond film, GoldenEye was released in the UK, with Pierce Brosnan making his debut as 007, but that hasn’t stopped video game publishers Activision recruiting another Bond to star in a big budget remake.

Daniel Craig has been hired to star alongside GoldenEye’s Judi Dench in a ‘reimagined’ take on the N64 classic, complete with a new version of the title sequence from Pussycat Doll Nicole Scherzinger. The game was released a few weeks ago and has already had a pretty positive response from gamers and Bond fans around the globe.

Now, all we need is a new game featuring Timothy Dalton as 007 to help make up for the loss of a third movie starring his Bond, and all will be right with the world.

Take a look at the video below to hear the first words from Craig as Bond in two years and to see his take on Brosnan’s bungee jump which we saw at the start of the original GoldenEye.

You know the name. You know the number. Wednesday 24 November is the 15th Anniversary of the release of GoldenEye, Pierce Brosnan’s debut as 007 in the UK, and the first new Bond movie we’d had since 1989.

Sadly, we’re now in period when Bond’s future is looking as shaky as it did back in the early-90s, just before the world’s interest in the character hit an all time high.

I was at university in 1995, and a regular at Morningside’s Dominion cinema. I remember spotting a small poster there early that year, one which depicted Brosnan clad in a tuxedo and clutching the iconic Walther PPK, the text noting that GoldenEye would be released in November.

I’d seen both A View to a Kill and The Living Daylights at the cinema on their release, but had missed out on the glory years of the 1960s, a time when Bondmania swept the globe and Sean Connery was who every man wanted to be and every woman wanted to be with.

GoldenEye had been written for Timothy Dalton to star in, following his final outing in 1989’s Licence to Kill, but he declined. This left the door open for Brosnan, the actor forced to turn down the part in 1986 due to commitments on US series, Remington Steele.

With no Cold War to fight, the producers were taking a gamble that Ian Fleming’s character was still relevant, the trailer reminding us that it was a new world, with new enemies.

This was a bold adventure for 007, one which embraced the past (Desmond Llewelyn as Q, vodka martinis, cheesy one-liners) while trying something new (a female M, no Aston Martin, no John Barry score) and, on the whole, it succeeded: GoldenEye was huge fun and still stands up to repeat viewing.

Brosnan may have been unceremoniously dumped in favour of Daniel Craig for 2006’s Casino Royale, but I still enjoy his portrayal, even if the films did lose their way towards the end.

Now, with MGM, the company which bankrolls Bond, in turmoil, it looks like 2012 is the earliest we’ll see a new film in the series. Will it star Craig? Will it go back to basics? Or is Bond past his sell-by-date?

Whatever the answer, let’s all watch our GoldenEye DVDs next week and remember a time when Bond wasn’t a four letter word to Hollywood financiers.

I’ll add some more GoldenEye-related posts over the next few days, but in the meantime here’s the trailer that introduced us to the new 007:

“Blue is beautiful, blue is best,” may well be Nick Clegg’s morning mantra these days, but back in 1972 it was the haunting call which alerted Dougal to the fact that something was wrong in Dougal and the Blue Cat (Second Sight Films), the film spin-off from BBC TV series, The Magic Roundabout. 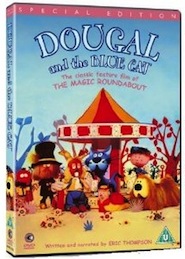 For those unfamiliar with the world crafted by Eric Thompson, the one belonging to Dougal, Zebedee, Florence, Dylan and others, it was a mainstay of British teatime TV from the mid 1960s until 1977, it took place in a magic garden where strange things happened regularly, not least of which was the fact that Dougal was a large, yellow, dog.

Adapted from the original French scripts, Thompson’s eccentric and heartwarming tales went widescreen with this oddity, which sees a strange force take over an abandoned factory in the garden, only for a new character, Buxton the blue cat, to arrive on the scene.

Convinced that Buxton is trouble, and already suspicious of the voice emanating from the factory which insists blue is best, it’s not long before Dougal and his pals are of on a new adventure to stop evil from infiltrating their quiet home.

Retaining the slightly spaced-out feel from TV, Thompson added a dash of menace to proceedings, Fenella Fielding drafted in as the voice which taunts Buxton into doing his worst. As a result, the film may look like it’s for kids, but there’s more than enough for adults to savour, Thompson skilfully giving each character a life of their own and ensuring the film works as a standalone adventure.

Extras include the original French language version of the film plus recollections from Thompson’s wife and daughter, actors Phylidia Law and Emma Thompson, as they remember the work Eric put into his adaptations.

Far away from the fantasy world of the Magic Roundabout, but still retaining a touch of surrealism, is David Hayman’s Silent Scream (BFI). 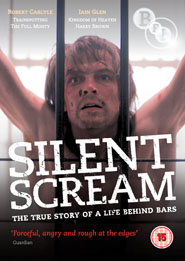 This 1990 film stars Iain Glen as notorious Scottish criminal, Larry Winters, sent to Glasgow’s Barlinnie prison in 1963 for the murder of a Soho barman. Moving back and forth through Winters’ life, we see him growing up in Glasgow and forging his career in the parachute regiment, violence and crime always in present.

Rather than shoot a traditional biography or crime thriller, the Hayman lets us see into the confused mind of Winters through a series of animated sequences and near-hallucinatory moments.

The prison’s Special Unit, which gives prisoners the opportunity to express themselves through art and music, is the catalyst for these sequences, Winters’ tortured mind struggling to maintain its composure.

Glen is impressive here, Hayman obtaining a layered performance which is never less than intense. Dubbed the new Al Pacino following the film’s release, Glen is pitch perfect as the tormented Winters, ensuring this is never an easy watch.

Sadly there’s no director’s commentary here to allow Hayman to give his view on the film, but the finished piece has thankfully lost none of its power in the 20 years since its release.